Types of  Mounds Found In North America - An Introduction

When the first explorers visited North America, they saw thousands of mounds and earthworks throughout their travels. Some of these mounds were built thousands of years before they found them and were abandoned, and grown over, and others were actually still in use. This is a map that was created in 1891 by the Smithsonian Institute (Cyrus Thomas was the author of the work) and each orange dot represents ancient earthworks that were recorded from the earliest times. I am grateful that this project was undertaken as a way to try to preserve this info for generations to come, because the majority of these sites have been erased from our countrysides. 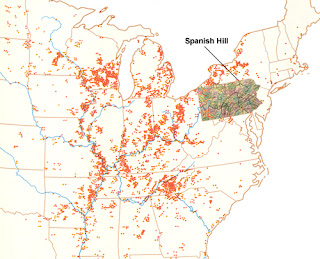 Again, the majority of these reported sites were only recorded by those who were keeping some sort of journal and were interested enough to have wrote about what they saw, and then tried to explain them with the best information they had. Cyrus Thomas's job was to go weed through these reports and to compile the most reliable ones into the map above.

Cyrus Thomas in fact recorded Spanish Hill in his report and categorized it as an "enclosure" because of the earthen embankments with interior ditch surrounding the ten acres around its summit. 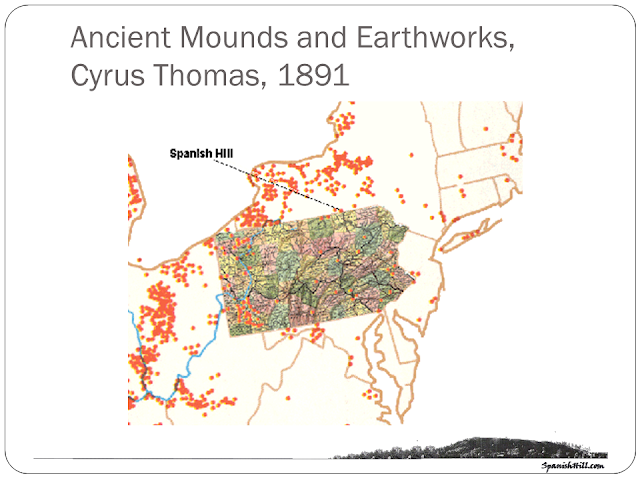 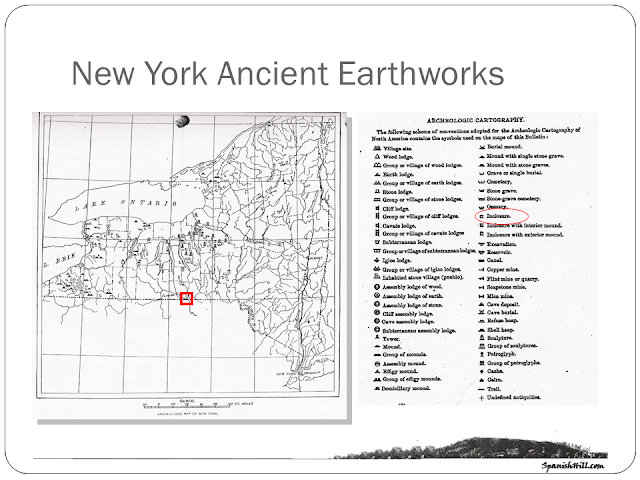 Many times, these original "discoverers" mistakenly believed that these structures were built by some other Europeans, Vikings, or culture other than the Native Indians. Our own Spanish Hill was no exception to this:

The earliest description of Spanish Hill known is that of Duke Rochefoucault de Liancourt, a French Traveler in 1795, who enroute to Niagara from the French Azilium, saw the hill and thus wrote of it:

"Near the confines of Pennsylvania a mountain rises from the bank of the river Tioga (Chemung) in the shape of a sugar loaf upon which are seen the remains of some entrenchments. These the inhabitants call the Spanish Ramparts, but I rather judge them to have been thrown up against the Indians in the time of M. de Nonville. (M. de Nonville was another Frenchman that had explored this region many years before Liancourt...) One perpendicular breastwork is yet remaining which, though covered with grass and bushes, plainly indicates that a parapet and a ditch have been constructed here." (La Rochefoucald-Liancourt 1795:76-7) 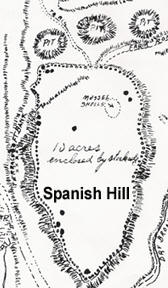 When we talk about Spanish Hill, we are not talking about a man-made mound, becuase it is a glacial moraine that was later manipulated on it's top. But because of it's location on the Chemung River and above the meeting of the Chemung and Susquehanna rivers, along with it's steep sides and size, it was a valued location no doubt for many an ancient traveler. Also - because we know there were embankments that enclosed ten acres on it's top, we also know that it was used for an extended amount of time by some culture as well. I have no doubt that the top of that hill was manipulated to serve the people that used it, yet - it still does not fall into the category of a man-made mound.

Man-made mounds were actually created by tons of dirt that were heaped by the bucket-full from
another "borrow pit" which may or may not be located near the site of the man-made mound.

Interestingly, there are three "pits" drawn on this map of Spanish Hill from the 30's that show pits where earth was most probably taken from to build the earthen embankments around the ten acres they enclosed an top of this glacially formed mound.

Other Mound Topics:
LOTS MORE TO COME - CHECK BACK SOON!