What was it used for?

There are several thoughts as to what Spanish Hill was used for, the following is one of the current most popular thoughts on the possible uses of the hill during the earliest periods we currently know of.  I do not believe that any one of these discounts the possibility of any of the others. Certainly, all of these uses could have actually have had their place in the history of Spanish Hill:

Another theory is that it was a place that was actually visited by the Spaniards.

Strangely, Louise Welles Murray, as she was trying to explain why the hill was named Spanish Hill wrote in 1908:

"There is, however, undisputed evidence from the earliest settlers (Shepards, Hannas, and others) that when they came the Indians remaining in this locality called the hill Espana or Hispan. Not only that, but that they stood in awe of the hill, and avoided ascending it"

"Early in the last century, Alpheus Harris settled at the foot of the hill. An old Indian was a frequent visitor, but when asked to ascend the hill he always refused, saying a Great Spirit lived there who would kill Indians.  That he spoke with a thunderous voice and made holes through Indians bodies. This suggests muskets or cannons" (Murray 1908:62, 64)

The earliest "locals" referred to the remains of fortifications as "Spanish Ramparts" and it is said that the Indians in this area would not go up on to the hill because there was something that made a a thunderous noise and made holes in those that dared to climb the hill.

The earliest description known is that of Duke Rochefoucault de Liancourt, a French Traveler in 1795, who enroute to Niagara, saw the hill and thus wrote of it:

"Near the confines of Pennsylvania a mountain rises from the bank of the river Tioga (Chemung) in the shape of a sugar loaf upon which are seen the remains of some entrenchments. These the inhabitants call the Spanish Ramparts, but I rather judge them to have been thrown up against the Indians in the time of M. de Nonville. One perpendicular breastwork is yet remaining which, though covered with grass and bushes, plainly indicates that a parapet and a ditch have been constructed here." (La Rochefoucald-Liancourt 1795:76-7)

This picture of the  cross and sword was provided by the Tioga Point Museum. 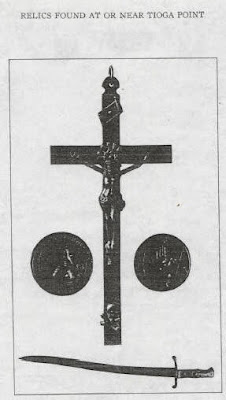 Louise Welles Murray actually shows pictures of artifacts of Spanish origin found on the hill to include a large sword.  There was also a boat thought to have been one of those small boats used from Spanish Galleons found in the river south of  Spanish Hill...blackened and thought to have been from the 16th century.

Louise Welles Murray discussed the crucifix shown here as one of the "Curious Relics" found in Athens:

"Naturally, the crucifix first attracts the attention, and it would be the most appropriate to be connected with a Spanish expedition. It is of wood (no doubt purporting to be the wood of the true cross) as black as ebony, possibly from lapse of time. It is seven inches long, bound in brass, and the figures are all brass. It was found while excavating for an outside cellarway, just south of the corner of Desmond and Vanderbilt streets (Athens, PA) seven feet under ground." - (Murray 1908:66)

Another sword reported by Murray:
"The sword was found opposite Miner's Island at Sheshequin, after
an extensive river freshet in 1895, by Fred Davidson or Mr. Alliger. It was seen first protruding from the bank about six or seven feet below the surface ; he had to dig it out with a crowbar. This was about one and one-half miles from where the old boat was washed out, on the river flats, where it always overflows. It is in a fairly good state of preservation, even to the leather on the hilt. There is no clew what ever to this, while it is possible it may have been buried with its owner. Who was he?"

It is well known that the Spanish were as far north as Pennsylvania by the mid 1500's.  The Spanish were in need of gold and silver to "save their queen" at that time, and thus we hear so much history about those Spanish Galleons, filled with riches that are found off our coasts when they sunk from time to time. As they plundered the south they started moving north...We know that Cartier for example was in the New England area as early as 1535...and Joseph Brant, the Mohawk chief that helped the British defeat his own people, told the story of a Spanish fleet that traveled in our area in search of a river that was said to have a "sparkling riverbed," only to find that the riverbed was covered with salt.