It was long believed that the top of Spanish Hill was the location of a village site. This in fact is incorrect. The top was enclosed by embankments in such a way that archaeologically we can say without a doubt that it was a sacred/ceremonial space that only the priests and the leaders would even go to. (click here to learn more about the area on top of the hill) But there was a village site found below the hill, which dates to per-Iroquoian times.

Here is an image drawn by Ellsworth Cowles showing what he found at this site below the hill: 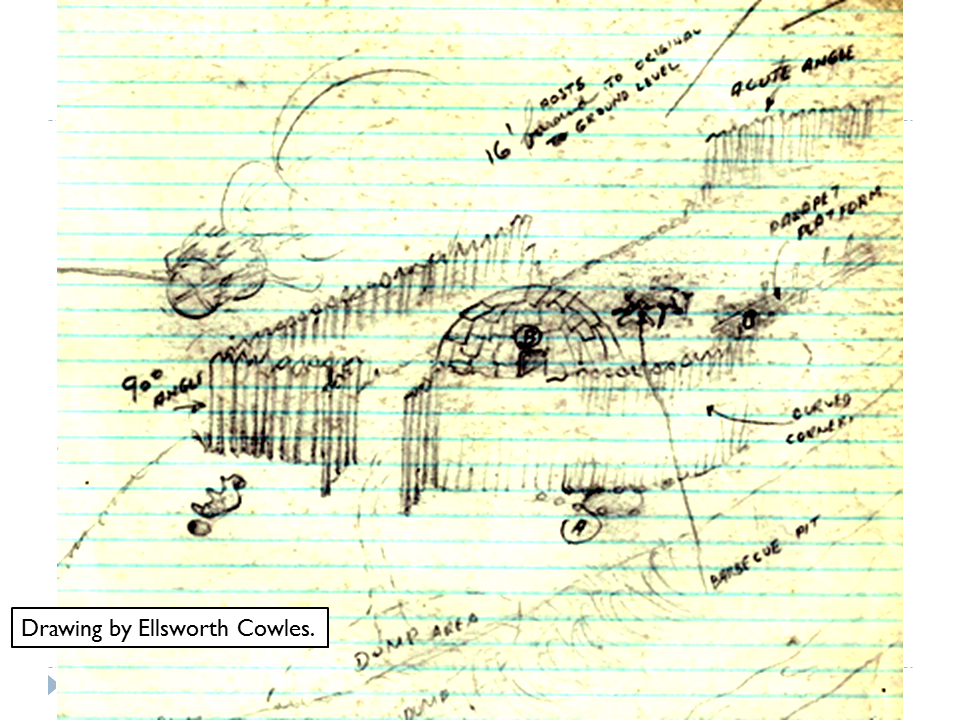 Local avocational archaeologist Ellsworth Cowles excavated the village site in 1933 and revisited several times for decades following it's discovery. Here is the report that Ellsworth wrote about the site in 1933.

Here are some images from the excavation in 1933: 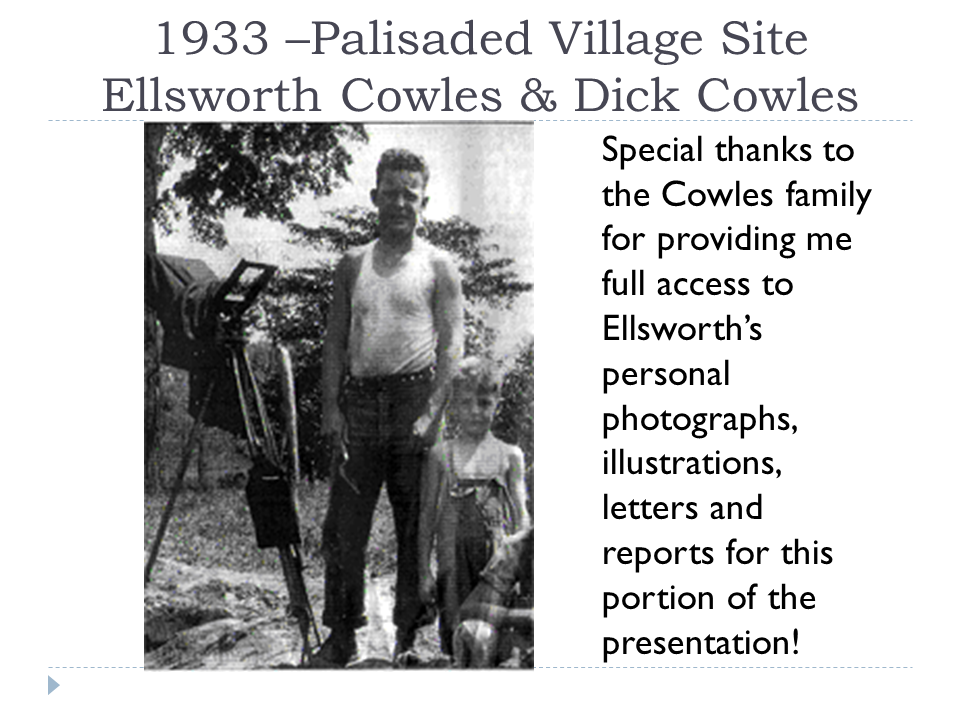 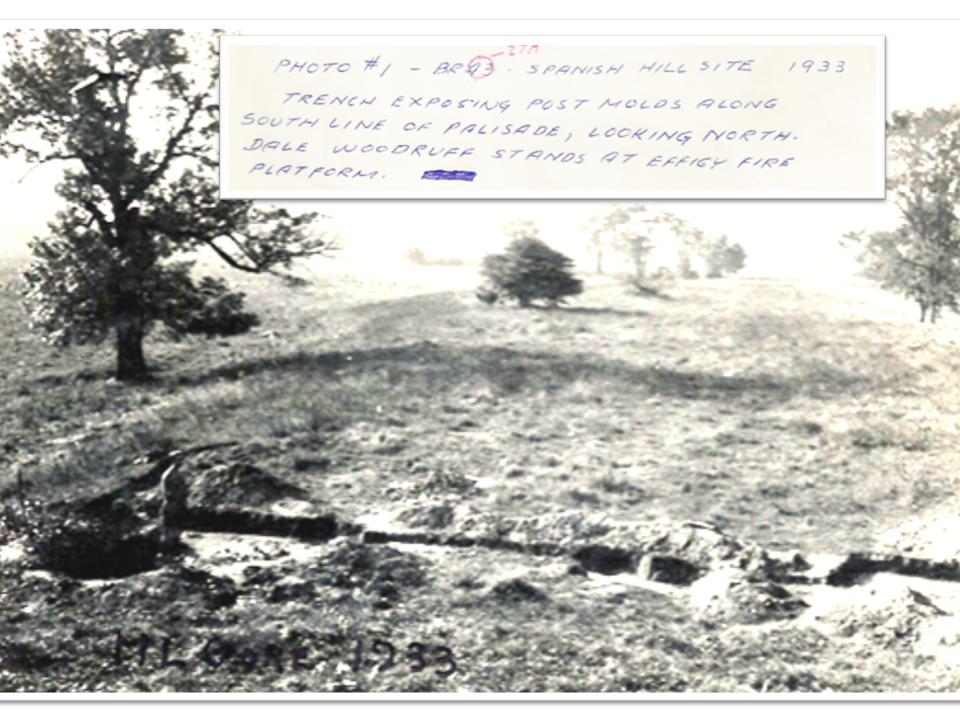 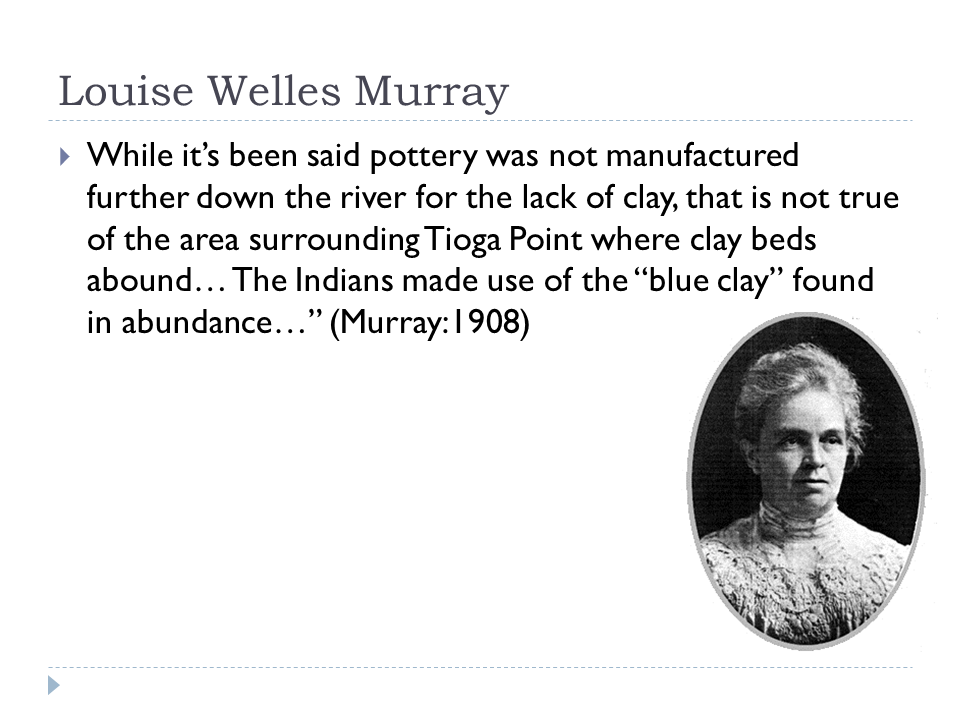 Cowles also noted that there was plenty of great clay for making pots in the creek bed right next to the village site for the women to make pots. Below is a photo of his son, Dick and Jack Merrill gathering clay in the creek bed. 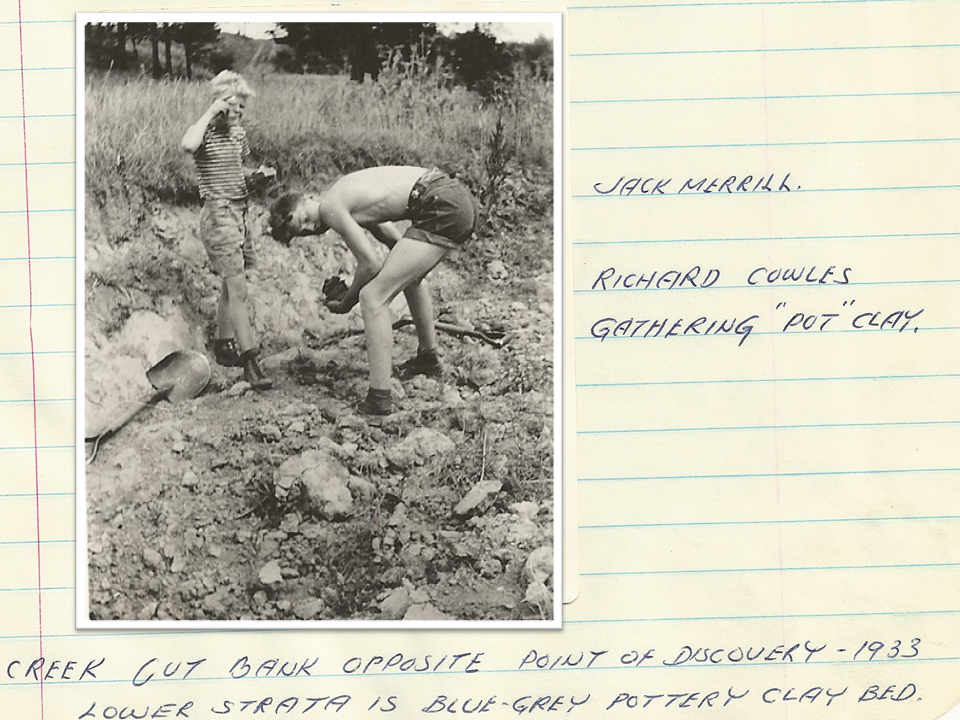 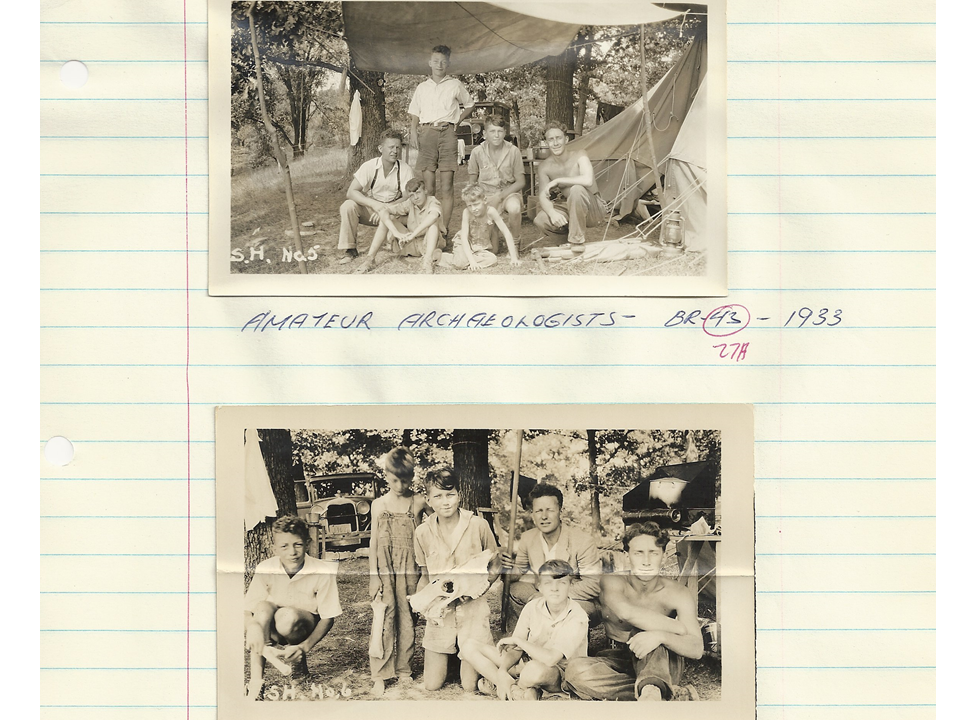 Dale Woodruff also helped Ellworth during this excavation and in other excavations in the Valley as well. The artifacts here are from the Spanish Hill village site, and are identified on the card they are placed on below: 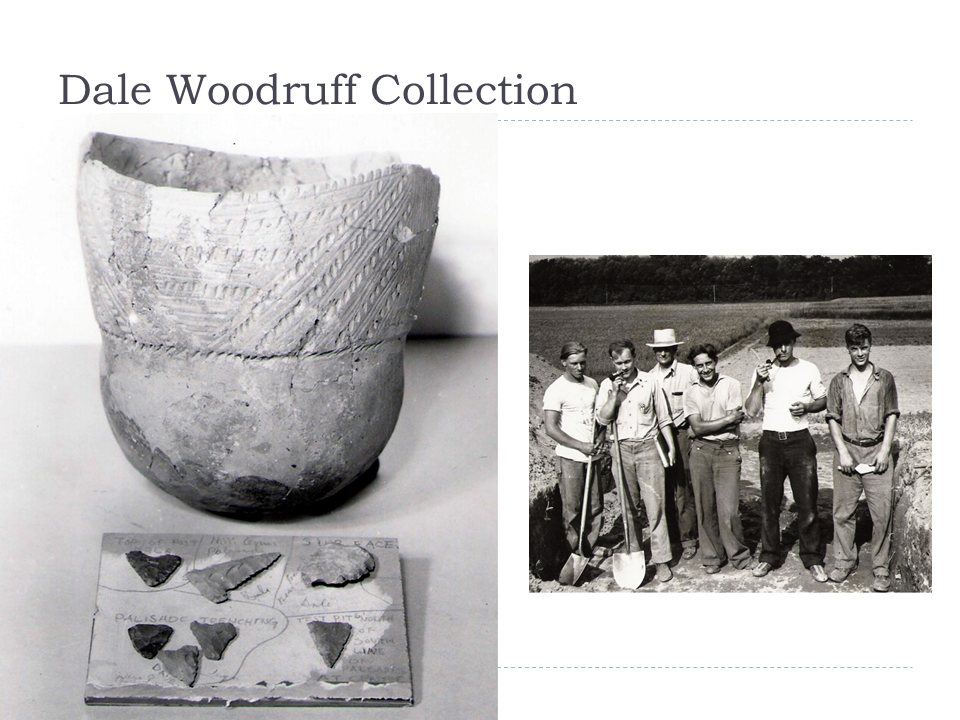 Note the pot shown above. This is a classic Suquehannock(Andaste) pot which is easily identified with it's high collar with incised decorations. 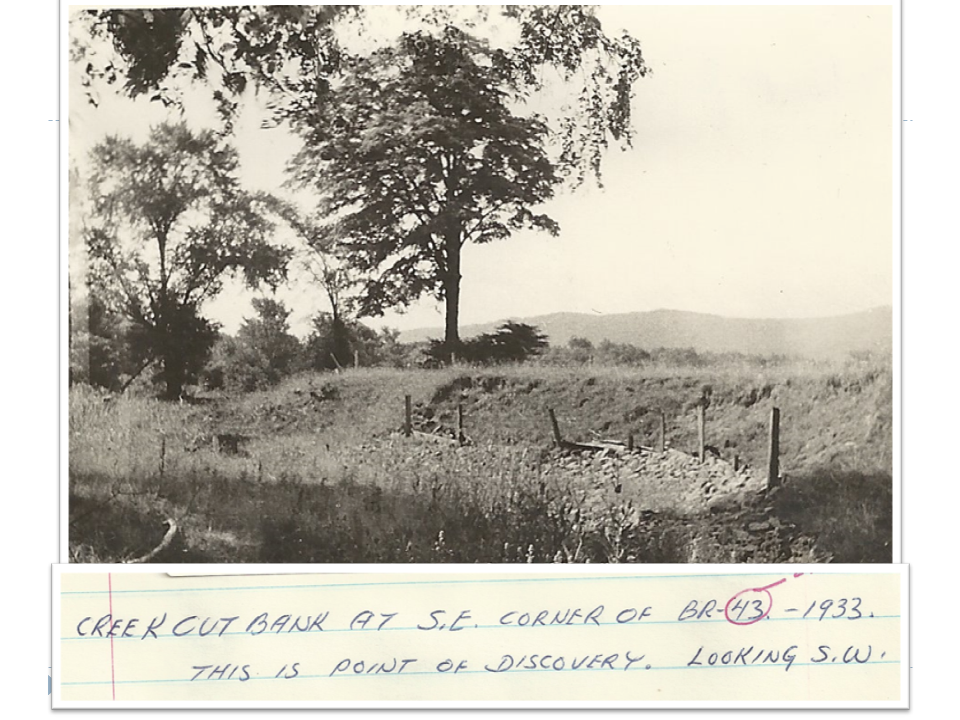 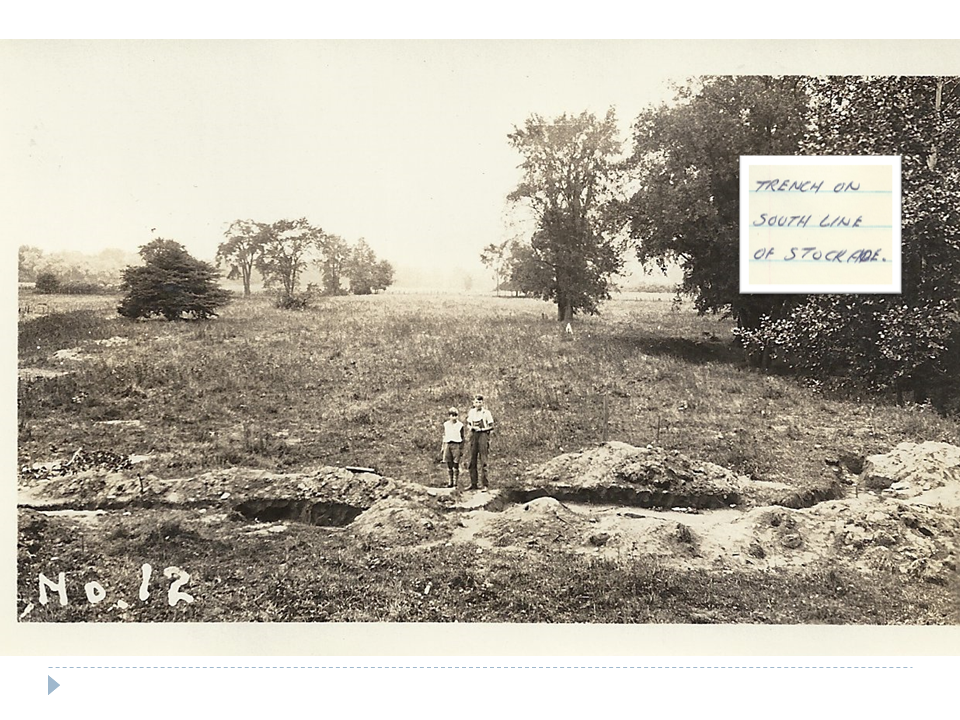 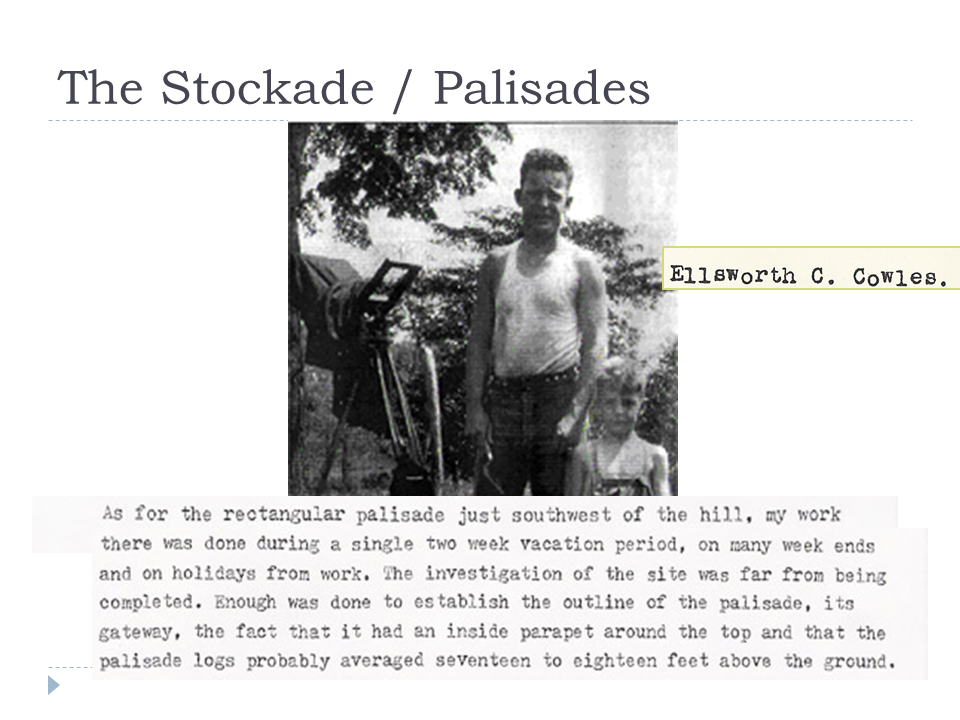 If you look closely in the ditches in the picture below, you will see dark circles. This would have been where huge logs were placed upright to build the palisade(wall)around the village site and rotted away leaving just the dark circles. One log had fallen and was measured which tells us that the wall would have been 17 - 18 feet tall. By following the dark circles in the ground, they could also tell where the wall existed and how big village the site was. 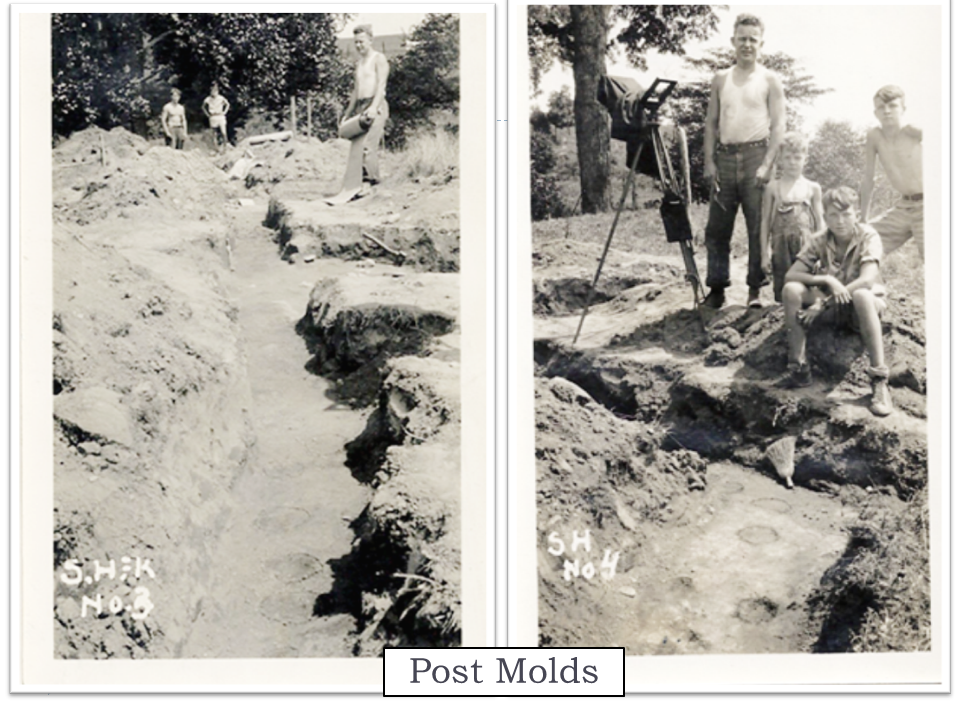 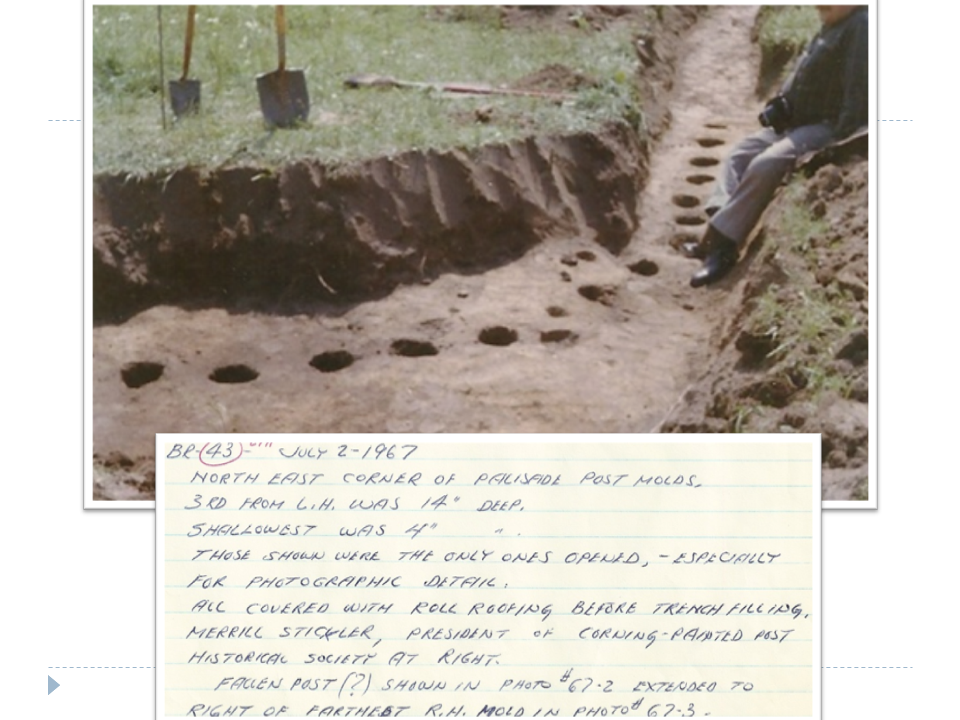 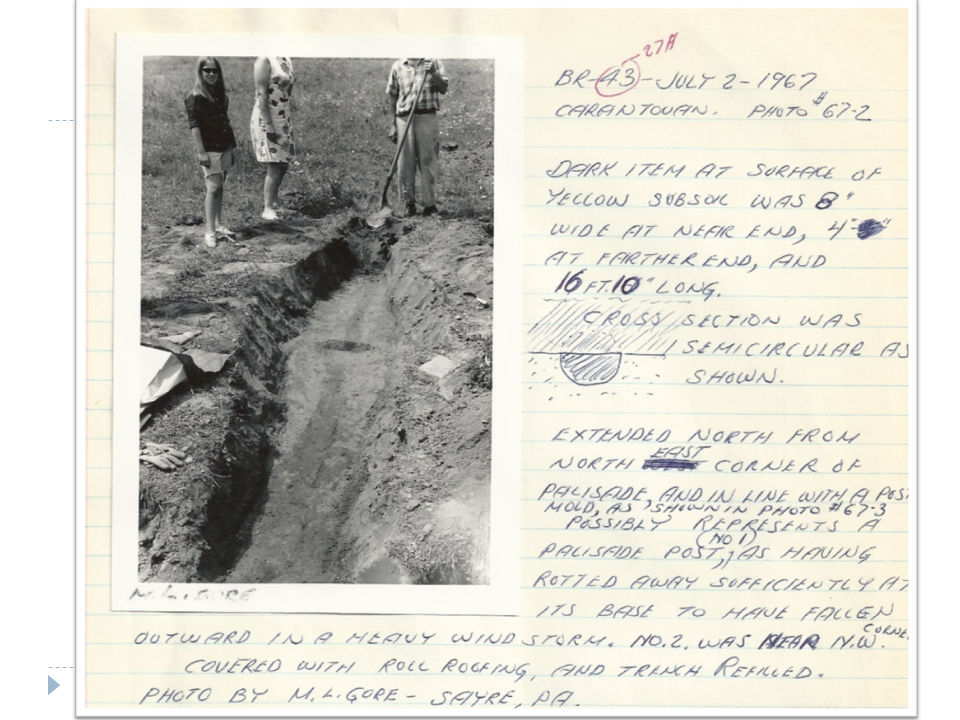 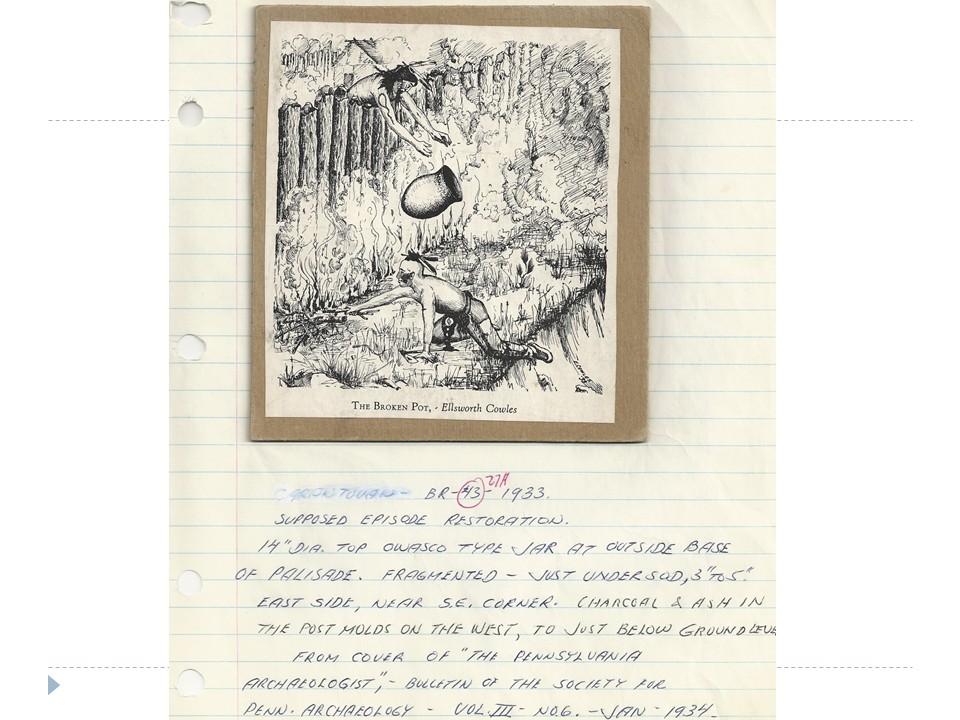 The Susquehanna River Archaeological Center (SRAC) has made a huge mural of this image commemorating the work done by Ellsworth Cowles at Spanish Hill. 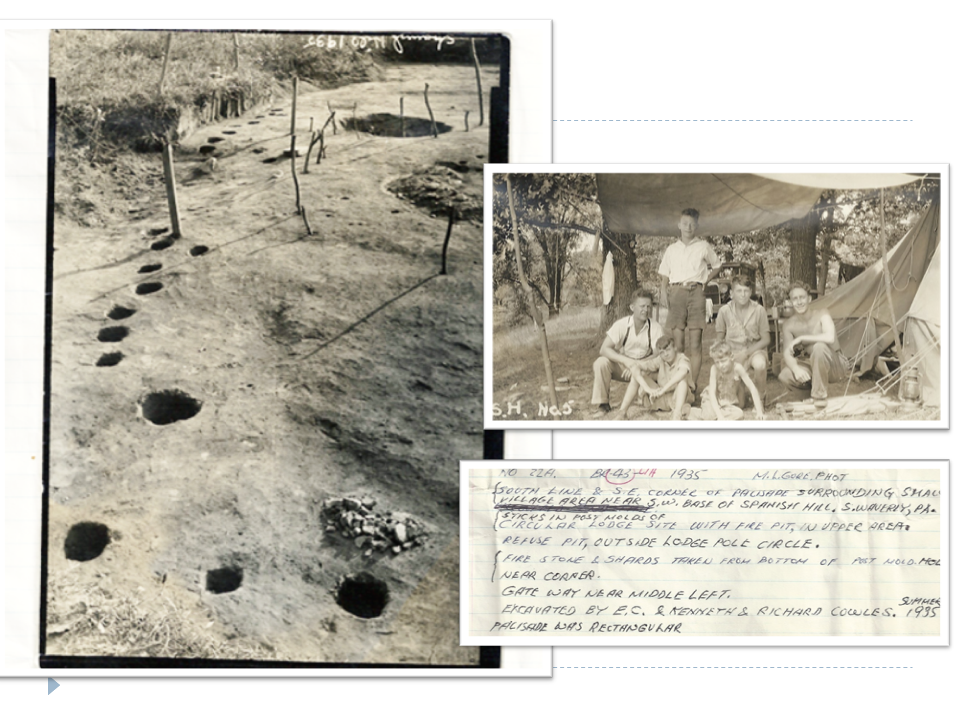 But they not only found the village with the palisade - they also found that the site was built upon an even earlier site that included what Cowles claimed to have been a stone effigy that when uncovered had a 6 inch spear still in the throat area.

EFFIGY?
You can also see in the top of the picture a shovel that gives you an idea of the size and dimensions of the so-called effigy. 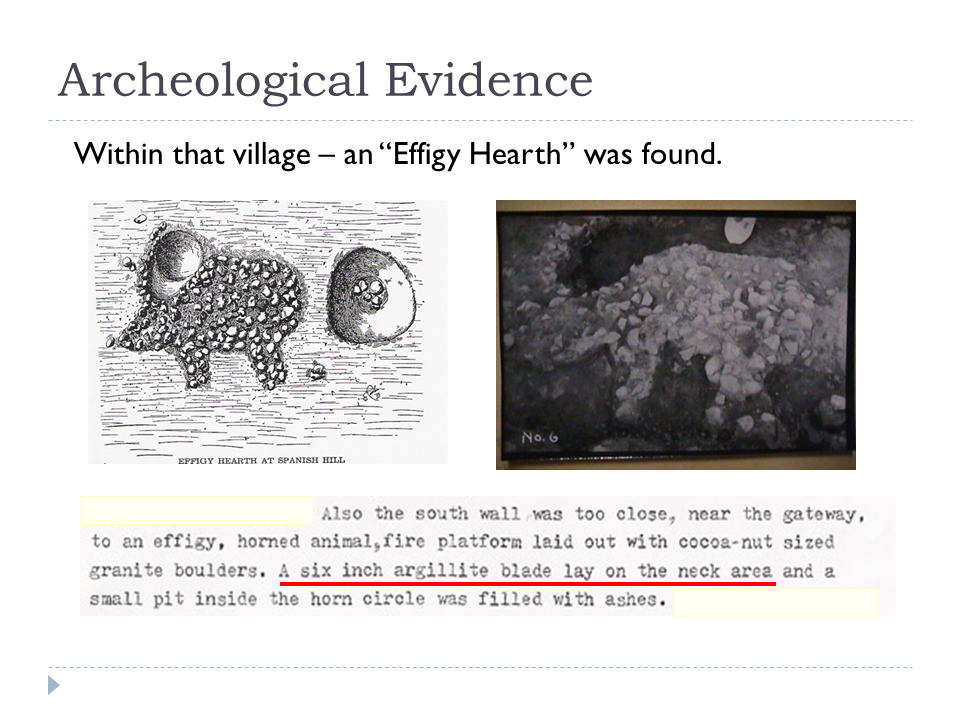 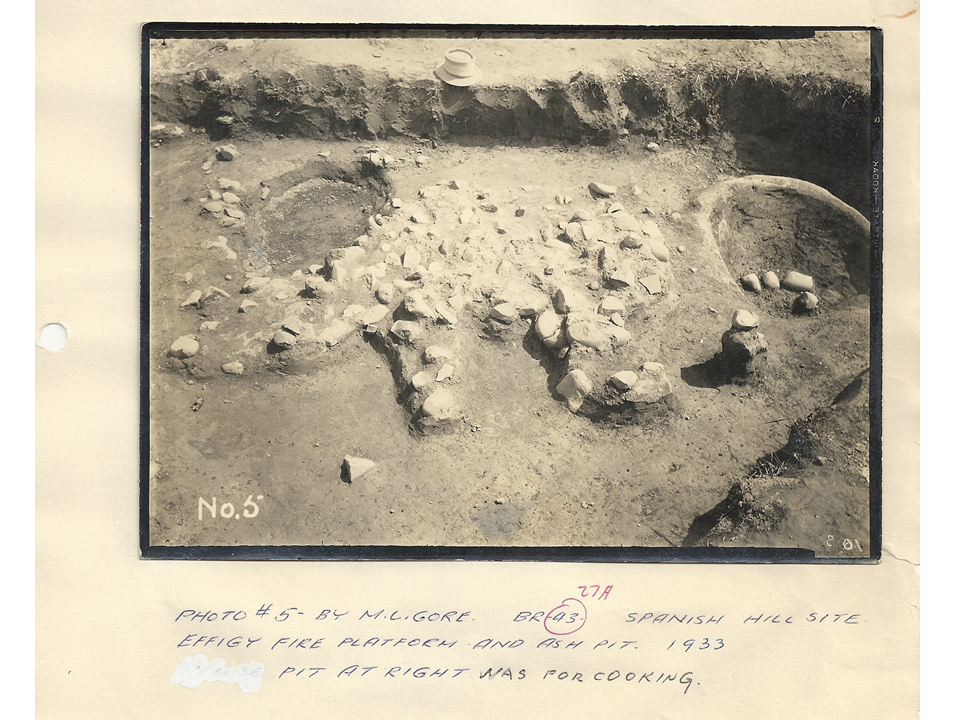 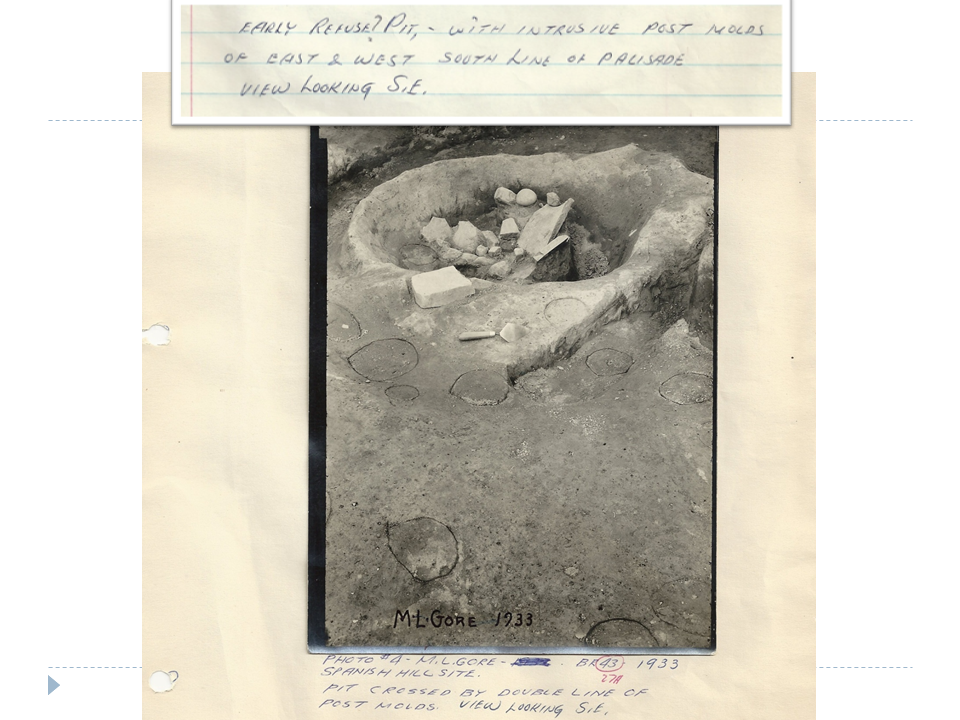 Below is an image that Ellsworth drew of the effigy.

Note that there were two fire pits discovered with the effigy. The image begins to appear with a little imagination of ceremonies before the Big Hunt with great fires and a great beast they would try to kill using a huge spear like what was said to be found in the throat of this effigy...

Whether the effigy is of a buffalo or other animal that roamed our area hundreds of years ago is debatable. Some people think that this effigy is of a mammoth, which it may very well be since Chemung a Delaware Indian term for "place of the big horn," and a huge mammoth tusk in it's riverbank. Interestingly - Ellsworth Cowles told the story of upon finding this effigy - Elsie Murray turned to him and said, "Why Ellsworth, I believe you have just uncovered a QuisQuis"

"THE LENAPE STONE OR THE INDIAN AND THE MAMMOTH BY H. C. MERCER" describes the "Quis Quis":
( - the full text can be read at : http://www.webroots.org/library/usanativ/lstiatm0.html  )

"David Cusic, the Tuscarora Indian, in his history of the Iroquois, among other instances, speaks of the Big Quisquis, [A word meaning " hog " in modern Iroquois.] a terrible monster who invaded at an early time the Indian settlements by Lake Ontario, and was at length driven back by the warriors from several villages after a severe engagement; and of the Big Elk, another great beast, who invaded the towns with fury and was at length killed in a great fight; and Elias Johnson, the Tuscarora chief, in his "History of the Six Nations," speaks of another monster that appeared at an early period in the history of his people, which they called Oyahguaharb, supposed to be some great mammoth who was furious against men, and destroyed the lives of many Indian hunters, but who was at length killed after a long and severe contest."

There was also a much later Cayuga village to the west of the hill near the river that was noted by a missionary named Camerhoff in1750: 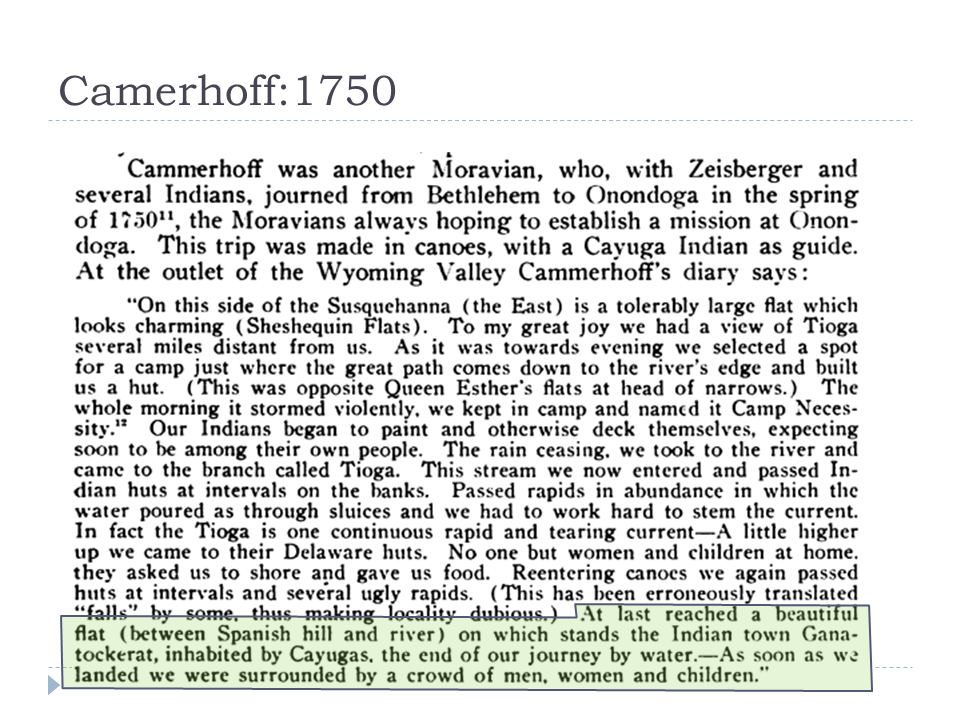