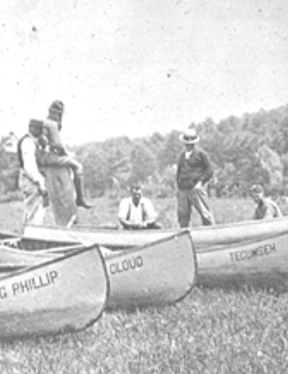 In 1916 Warren K.Moorehead was getting ready to lead an expedition to search for Susquehannock sites to obtain under less than honest means artifacts from along the Susquehanna River and on the behalf of the Heye Museum.

Very few people understand that the founder of the Heye museum was a collector who bought and sold artifacts for his own entertainment. Moorehead - just one of the many of Heye's puppets - was even worse.

This was the darkest of times in American Archaeology - and for the preservation our own local Native American heritage.

Moorehead had learned that he could sell artifacts at a great profit and amass wealth he had only dreamed of. Here is just one example of his excitement in his selling of Native American artifacts from his personal journals:

New York, N.Y.
Dec. 21st, 1891
6 P.M.
Well, dame Fortune has smiled upon me! I am the happiest man in New York this
evening and can well afford to enjoy the best cigar the hotel has in stock. Last Wednesday I
left Chillicothe. Reached Washington at 2-10 P.M. Thursday and met Fowke at depot.
Together we proceeded to the Bureau of Ethnology. There I opened my grip and exhibited
the copper fish, combs, swastika crosses and various peculiar designs to the scientists
present!!

The expedition in 1916 was just a continuation of his exploits as he teamed up with George Heye to look for Susquehannock graves to rob under the guise of being a research project. The following documents clearly reveal the real intent of the expedition: 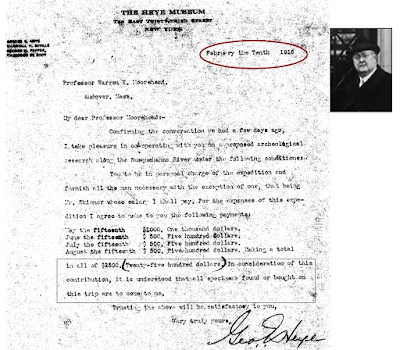 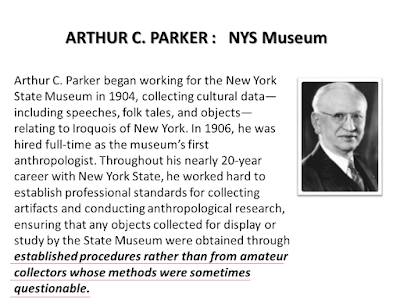 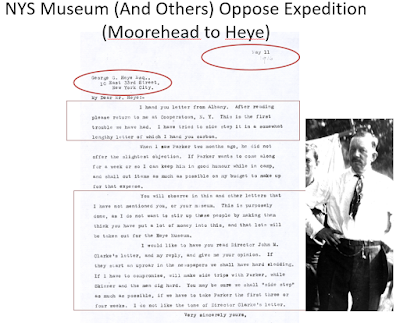 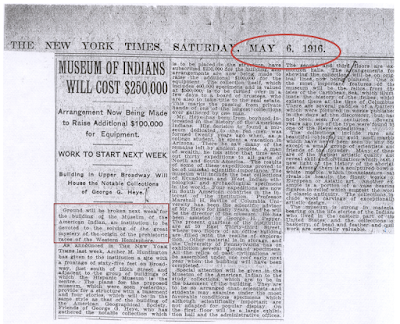 Twenty years would pass before the "Susquehanna River Expedition" went to print and the beginning pages are an apology for the "loss of" most of the records by that time.... It was obvious that Moorehead felt the need to defend his “short visit” at Spanish Hill as well stating, “Our examination was by no means complete. In subsequent years, there have been various critics of my operations. None of our friendly critics seems to realize that we devoted three weeks’ time to the Tioga, Murray, or Spanish Hill sector.” (Moorehead 1936:68) Instead the team spent the time at the Murray Farm burial ground where they unearthed 57 burials and took ALL artifacts and evidence of them on behalf of the Heye Museum.

We will never know all that was lost to this "expedition" but I can say with confidence that even they were impressed with what they got away with - as here is a letter to Moorehead by Alanson Skinner who lead the excavations for him in Athens at the Murray Farm cemetary: 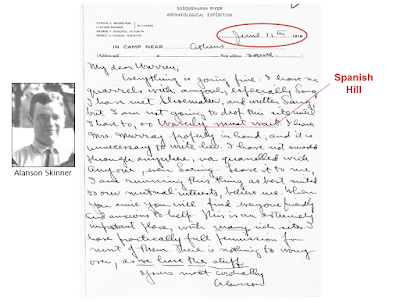 There were indeed quite a lot of “critics” that voiced their discontent with his report. One "local" that was present during those two days was a man named L.D. Shoemaker.  L.D. Shoemaker was one of the people that Moorehead noted in his book that remained at Spanish Hill while Moorehead’s team returned to the Murray site. There are several letters in the Tioga Point Museum from L. D. Shoemaker to Louise Welles Murray concerning the Moorehead expedition on Spanish Hill. As an example, I have included the following text from one of these letters so that you can see just how upset Mr. Shoemaker was before Moorehead's book ever came out. 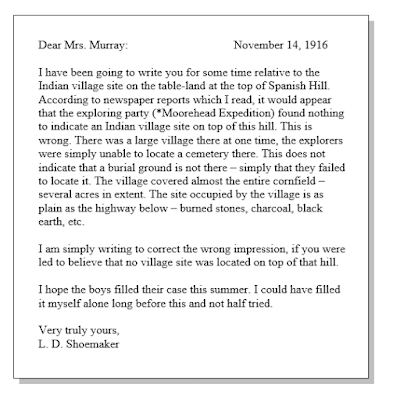 After 1916, Louise Welles Murray would lose faith in these "greedy collectors" and publish her own work on the area's archaeological records. I cannot think of how much she must still have been upset about Moorhead, Heye and others to have begun her article in this way: 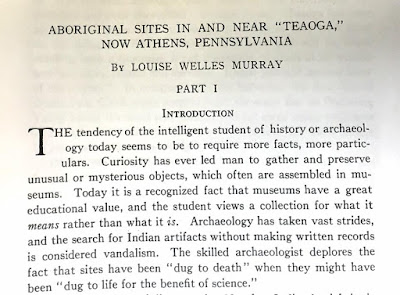 The point I am trying to make here is that it takes diligence to preserve the truth about our local archaeology and Native American prehistoric past - and it is important that we are educated about it and embrace it as part of own heritage. I also hope that this information can make you realize how easy it is for it to be lost without work such as this.